This post is a little more medically technical.  A working knowledge of anatomy is suggested, so parents may want to screen it first.

I don’t ever want someone to use the word PROBE and then refer to my body in the same sentence.   It conjures all manner of horrific scenarios.

Remember the movie Fletch?  Likely not.  Probably shouldn’t click on this Link unless you are at least 18…

We take care of a lot of men with complicated problems with their urinary tracts, including prostate and bladder issues.  Frequently, they come to us seeking help, and they have an indwelling catheter.  Most commonly called a Foley Catheter, it is a rubber tube that is inserted into the  wee-wee and left inside the bladder for up to weeks at a time.

Side note:  I bet Dr. Foley was so proud to have this device named after himself…  I’m just picturing if I had invented it.  Medical personnel around the world would be saying things like “Hey Nurse Cratchet, did you put the Moultray in that guy already?!”  Or, “Darn, there’s a ball of blood clots plugging up that guy’s Moultray.”  Or, “Shoot, there’s a stream of urine leaking around this fellow’s Moultray, can you change it out?”  That would be cool.  I mean, weird.

In Spanish, we call the catheter a “Sonda,” which translates to PROBE.  Again, frightening imagery.

So anyway, yesterday a 40 year old gentleman named Bobby (not his real name) and his wife presented to my office with just such a device dangling from his body.  It is not very common for a man this young to have a Sonda, so I had to do a little investigation.

It turns out he had a traumatic accident the previous year, and there was some injury to his pelvis.  Sometimes a Sonda is put in if there is suspicion for injury to the bladder, or sometimes if there is injury to the spinal cord.  It was unclear to me, in his situation, if he had sustained either.  However, some time after the injury the sonda was removed and he was able to urinate again without trouble.

The reason he now had a Sonda again was that a month ago he had some pelvic pain.  From his perspective, it felt very similar to the symptoms he had last year when he needed the Sonda.  So his solution was to go to a hospital and ask for another Sonda.  The hospital personnel acquiesced, and in went the tube.

My question to him was simply, “did you feel better after they put the Sonda in, and do you still feel better?”  To this he replied, “Hmmmm.  No.”

My next question to him was about his bowel movements.  He admitted that he was constipated.  Aha, this might be our answer for his pelvic pain.  We were going to take the tube out, try some stool softeners, and see how that went.  We took out the tube, and over the course of the day he was able to urinate fine.

As we wrapped things up in my office, I jokingly teased he and his wife that it must have been hard this past month to have intimate relations…

I saw them exchange glances, with a look of sheer horror.  I think they were sitting there wondering if I understood the logistics of intercourse.  But wait, doc, there’s this tubey-thingy…  How?…  Then, I wonder if they thought I had lost something in translation.  This guy’s Spanish is terrible, maybe he meant, “it must be difficult to play soccer together with that thing?”

In any event, the light bulb eventually clicked for them; they both erupted in nervous laughter which evolved into sincere ‘thank-goodness-the-doc-was-kidding-and-isn’t-crazy‘ laughter.  Then, off they went, Bobby elated to be free of his dangling burden.

Photo of the day:

This boy of 5 years came to us with a condition called ‘Blount’s disease,’ which can cause a severe form of bow-leggedness.  He was already showing signs of arthritis and stress in his knee joints.  The Orthopedic surgical brigade that comes down every 6 months was able to perform a surgery on him that will prevent life-altering deformation. 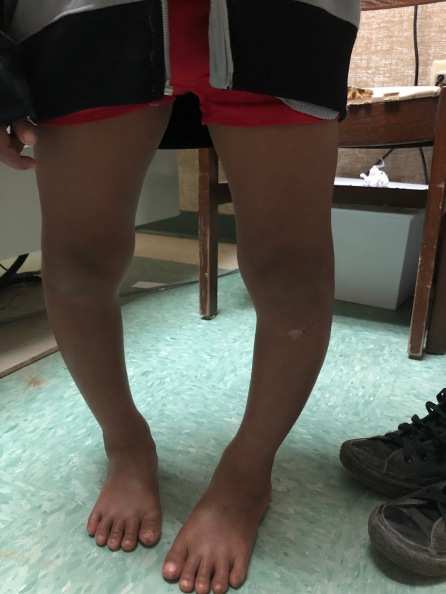