WE’ve made it!  we’re here, we’re not dead, we haven’t been kidnapped, and thus far no machete wounds or scorpion stings, so all those prayers answered, Thanks!!

Juliet, forced smile after first night of bugs feasting on her face 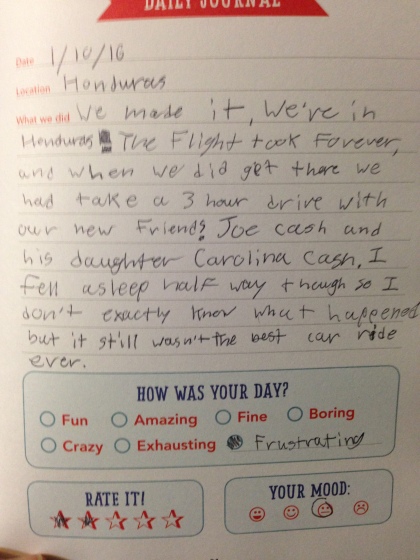 Our fridge is a little rusty. But, we HAVE a fridge! We are Thankful!

Rusty Fridge? Make lemonade from lemons… Cover it with ART

View from our front door. This is rough… 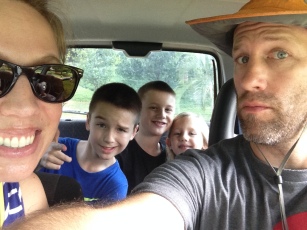 Neighbor girls, the Stocktons, welcomed up with pictures. 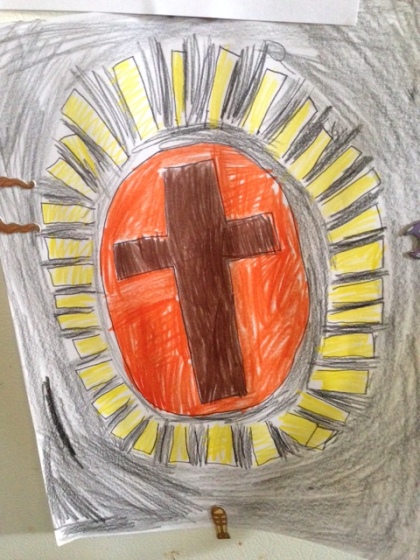 Owen reminds us why we’re here.

Well, what can I say?  it’s DAMN hot!  oops, i just swore.  Can missionaries do that?  I’m not quite sure.  I don’t remember reading that in our contract.  We did agree to no alcohol for the year–that’s when Heidi really realized that this wasn’t going to be a glorified vacation.  (HeHee, that’s a joke–sort of)  We were kinda hoping that once we agreed to be missionaries and let go of our American lives, that we would be instantly transformed into perfect and holy people.  I guess God will have to settle for some imperfect servants to get his work done down here.  I’m pretty sure we’ll be holier by the end of the trip though (again, joking.  picture a smiley emoticon)

So, some nuts and bolts of our new home/what we’ve been doing:

First, God has really come through with our housing.  It was a big prayer of Heidi’s–our new home.  We didn’t really know what we were praying for, but once we got here and understood the lay of the land, we realized He had already gone before us.   Por ejemplo (for example), Most of the missionaries who first arrive have to do their time in the dreaded ‘Guest Housing.’  Apparently they are small and have poor circulation, and only have one window.  We are finding that ‘air circulation’ is good in the jungle.  So, somehow they fast-tracked us past the apartments into the bottom floor of a house, the top floor of which has been occupied by the Field family, for several years.  They have graciously agreed to let us invade their downstairs.   Having them above us will offer a certain feeling of security for Heidi, when I am away at night at the hospital.   This also was an unforeseen answer to prayer.  Next, this location is a little higher on ‘the hill’ which is much more proximal to the families that live here, and so the kids will be in the thick of the kid chaos.   Finally, we have more space than expected, and our floors are not made of dirt!  We are very grateful.

One challenge we are facing are the bugs.  Heidi and Juliet more than us boys, as they are ‘attracter and reactors.’  That means that bugs like to bite them, and they get worse skin reactions when they get bit.   So that kinda sucks for them.  See photo of Juliet.  Sleeping at night has been rough for them, as the ‘no-see-ums’ sneak through the screen and get em’.

We have been very warmly welcomed by everyone we have met.  Another answer to prayer.  There are several families with kids all around us, and we feel that it will be a great community of friends and support.  We have been especially grateful to Joe Cash who has schlepped us all around the area, showing us where everything is, giving us tours of the hospital, school, orphanage, and remote villages.   Also, he keeps buying the kids chips and soda.  So, yeah, we like him.

The kids are seriously loving it here.  For one thing, I don’t think they have watched more than 30 minutes of screen time since we arrived.  Moreover, they haven’t really wanted to.  They have been busy capturing the amazing assortment of butterflies that are swarming the multicolored flowers growing right outside our door;  Catching lizards off the walls last night, and chasing fireflies in the grass;  Listening for Howler monkeys, throwing the baseball, coloring and drawing, playing cribbage and checkers, playing with the neighbor kids around the ‘compound.’  Oh yeah, it turns out that they are not in school just yet.  November through January is basically like their Summer break.   It’s actually the rainy season, and at times the rivers are so flooded and swollen that the villagers cannot cross them to be able to attend school.   So this is the best time to have their long ‘break.’  So they will begin school in early February.   In the meantime, they are having a ball.   Today, we asked one of the groundskeepers of the area if he knew where to find Tarantulas.   He showed us an area (100 yards from our home) where he has seen dozens.  Unfortunately, didn’t find any today.   But when we do, we will post them.  In the States we had pet tortoises, here we intend to have pet Tarantulas.

Today, we ventured to the beach in a car they are loaning us, named ‘Freddy.’  Don’t get too excited about this beach i’m describing, I will post some pictures later.   This is not the Caribbean Sea that you dream about.  The rivers pouring into the sea dump lots of muddy water that makes the water brown.  Also, there is garbage EVERYWHERE.  I’m pretty sure the coast of Honduras is where every pair of flip flops you ever lost in your lifetime has eventually washed up.

Tommorrow, Joe is taking us back to the city of La Ceiba, which is the 3rd largest city in Honduras.   Here we will stock up on groceries and some supplies that we will need for next several weeks.   They actually have quite a few American amenities in this city, such as burger king and a Wal Mart as of 2 months ago–whooo Honduras, way to regress!

What do you mean, work?  Oh, you mean what I came down here for?  Yes, I start officially in 12 days.   They want me to get acclimated, get our Home in order, and I will do some shadowing of the other docs, so I can learn and re-learn a bunch of things.

Just got back from the Cash home, where we had a wonderful home-cooked meal of Chile.  Omar, a local Honduran who will marry Allysa, an American who works at the Hospital, was gracious enough to help us with our Spanish and share some ‘muy fuerte’-very strong Cawfee with us.  He’s a coffee snob too, so I liked him immediately.  In turn, my son Will taught him how to play 5 card draw.  He also taught me how to say ‘Dude’ in Spanish.   So I got that going for me, which is nice.

ok, enough for the day.  Thanks, and Blessings to all of you who read this;  Moultray out…

13 thoughts on “¡Bienvenidos a Honduras!”