As the commotion erupted from the emergency entrance of the hospital, I made my way over to the ER to see what we were getting.  The middle aged gentleman was obviously in a lot of pain, writhing on the stretcher.  He kept saying the same thing over and over, and it was actually in broken English.  “I god a pain een my stomag!”  His family members quickly filled us in on the details of his encounter:  Man versus Bull.

Apparently the bull had charged him from behind, trampled him, and stepped on his chest, as evidenced by the hoof mark on his skin.  I felt it was a worrisome sign that his belly was so extremely tender, so we approached him as if he had internal bleeding, starting IV’s getting x-rays and doing labwork.

Part of the process of evaluating and stabilizing a trauma patient is placing a foley catheter in the bladder.  (you know, putting a tube up you-know-where).  One of the things this shows is if there is blood in the urine, and a potentially more serious internal injury.

So Liz (RN) and I explained to him what we were about to do with the long, plastic tube, ominously close to his private parts.   He looked up at us and promptly said in Spanish ‘I don’t want that.’  We countered with several very reasonable medical indications for this violation of his manhood.  He came back to us with “I’m afraid of that.”  We reassured him that it wouldn’t hurt—very much…

In a final act of severe desperation, he vehemently blurted out:  (…and i’m going to embellish this just a bit)  “Look, you morons, the bull stepped on my chest, not on my junk, so just back off!!”

For what it’s worth, we did get the catheter in him.  And miraculously he didn’t break any bones or have any interal bleeding.  He went home the next day, no worse for wear, and his stomach felt better.  I’m guessing he’ll be having Rocky Mountain Oysters in the very near future…

The hospital has been plum ‘Loco’ lately.  Lots of really sick people, with difficult to manage conditions, some of them diagnostically challenging.  Needless to say, I think we docs are tired…  Last night I admitted my third fellow named Santos to the hospital.  Santos means ‘Saint’ in Spanish.  Two of the guys really are saints, the last one I’m not sure about (I just did a chest X-ray and found a random bullet in there, not related to his problem.  I guess that would count as some pertinent medical history…)

One of my Santos’ was shot by a bullet over 10 years ago and severed some of the nerves in his spine, so he is partially paraplegic—this is not random-bullet-in-the-chest-guy.  He can actually walk some, but has no feeling in his lower feet or legs.  Consequently, he has destroyed the bones and skin in his legs from repetitive injury over the years (Hey, that’s why pain is good, right?  It tells you that something bad is happening to your body).  Anyway, he has an infection in his skin and bones, so we are pounding him with antibiotics and wound care.

The second Santos has severe heart failure which has caused him to develop Liver enlargement, among other problems.  We also diagnosed him with Chagas disease, which I have spoken about before.  Passed by the ‘Kissing Bug,’ Chagas is a significant cause of heart failure and early death in Central and South America.

My last Santos, unfortunately, just passed away yesterday.  He was only 40, but suffered a massive stroke.  Since we don’t have a CAT scan, we could only speculate that he likely had a ruptured anuerysm.  He was hanging in there for a little bit but developed respiratory failure, which is a hard thing to watch.  It was painful to explain to his wife, daughter, mother and sister that he was about to die.  Their ensuing wails of grief punctuated my own frustration at not being able to do more for him.  I prayed with him, and we took solace in knowing that he had faith in Jesus.

Among other serious patients, we have one fellow who basically broke his face off after hitting a cow on his motorcycle.  He has a Laforte fracture of his facial bones, which is an unstable situation.  He broke half his ribs as well, and then his lung collapsed.  He had to be intubated and on a ventilator for some time.  But miraculously he is improving.

There is a man who lives up in the mountains who was bitten by a Barba Amarilla (see previous post), a very dangerous viper, and almost died.  He was bleeding from his gums because his clotting factors were destroyed.  He then developed Tetanus yesterday, displaying a classic presentation called Risus Sardonicus, which is Latin for ‘rictus grin’ or grimacing grin–Anyway, it’s a bad grin.  He is actually doing ok, which is another miracle.  Even cooler is that he accepted Jesus as his Savior yesterday morning!

We appreciate prayers for healing of our patients, wisdom in their care, and stamina.  Thank you! 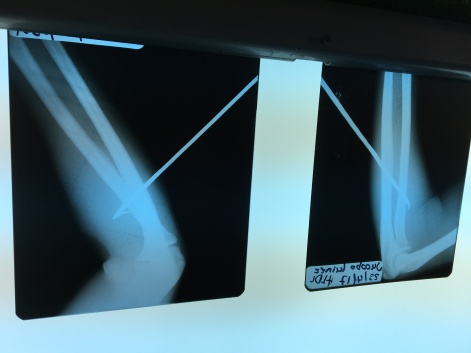 As Dr. Peter and I have discussed, the most dangerous creature out in the Carribean Sea is… us!—Humans. This guy was shot in the arm by a speargun, wielded by his buddy. Oopsie-daisy!

Imagine our surprise, and great relief, to find a store that had every version of SPAM that one could ever hope and dream to spread upon a cracker.  It really is the perfect food, I highly endorse it from a healthy eating standpoint…  😉 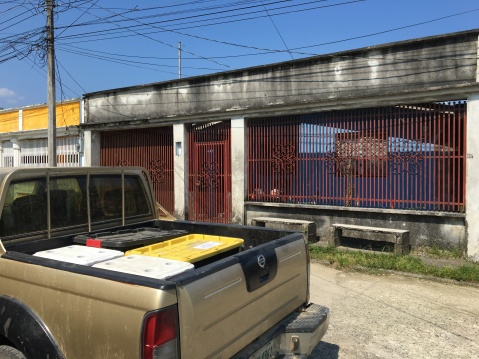 Most homes in the city are surrounded with bars, for protection from theft and worse. 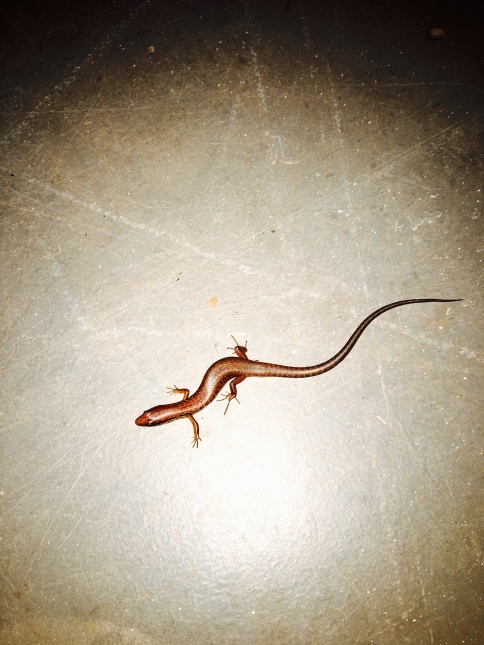 cool lizard on our porch 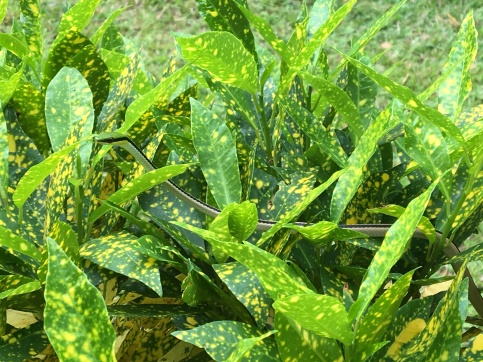 Vine snake on the bushes in front of our porch

Preparing for a serious game of Ultimate Frisbee, Lizzie, Jessica, Zach and Heather.

Morning run down the road to Lucinda

If you would like to help support the Moultray’s in this ministry, please click HERE to find out more.