Let me tell you about Deneli, and something called Xeroderma pigmentosa…

We had been itching to visit the children’s center since our arrival, but just hadn’t made it there yet. If you want to know a little about the center, check it out here.  The children’s center is run by Iain Mackenzie, a gregarious, friendly grey-bearded Scottish fellow, and his lovely wife, Liz.

One day the five of us piled into the car, threw footballs and frisbee’s in the rear, and sped down the pothole ridden road to the Children’s Center campus to hang out.  They have a large field in front for futbol (soccer), and a lone boy (luis, as it were) was kicking a ball in the air, to himself;   We joined him, with frisbee and footballs in hand.  He was suprisingly good at hucking both projectiles;  I guess we’re not the first gringos to try and convert him to other sports.

Pretty soon, Darwin and Naun (nah-ooh) joined us.  Darwin, if you will recall, is a bright young man that helps with translation at the hospital.  Also, and most importantly, he is a Seahawks fan.  He is enjoying the Russell Wilson jersey I gave him.  Naun is a very gentle and friendly young man, about 18 yrs old.  Naun is Owen’s climbing post, punching bag, and all around best buddy.  Naun does some work on the ‘compound’ grounds, so he is outside our apartment quite often.  The first time I saw Naun working in the yard, I immediately called the administration to have him fired.  He is a strapping young lad, musclebound with a carefree smile.  I decided I couldn’t have this handsome buck strutting around the yard with my wife oogling him from the kitchen.  But then I decided that this probably wasn’t reasonable, and Heidi reassured me that she was only stealing occasional glances, so I called off the dogs.  Anyway, turns out Naun is an awesome guy, and my kids love him. He recently taught me the Honduran way to say ‘Whasup?!’ which is ‘Que Pedo?’ This phrase literally translates to:  What Fart? — I Love it…

Eventually, inevitably, they wanted to play futbol (soccer).  I was on a team with Naun and Darwin, playing a 3 on 3 game they like to play.  Darwin ran down the rules and away we went.  Now, the last time I played soccer I was in 4th grade, on the Tornadoes, and I had no clue what I was doing.  Things really haven’t changed much in 33 years.  Let’s just say that I suck at futbol, and leave it at that.  When we were done (losing), Darwin said ‘maybe you can just watch this next game…’  Ok yeah, good idea buddy.

So, it was at this point that Heidi and I wandered closer to the children’s housing area and spotted Deneli.  Deneli caught our eye for 2 reasons.  One, she was making a big ruckus, yelling and laughing, running around the yard in front of the casitas (little houses).  The other reason she got our attention was her striking appearance–See the picture below.  She has a condition called Xeroderma Pigmentosa, which is a genetic disorder which causes a severe skin condition. Deneli’s face was wrapped with gauze, covering her left eye. Her right eye was matted almost shut with yellowish crust, and her blood shot eye was weeping mucous.  Her lips were deformed with a large brown, scabbed, nodular growth, which it turns out was a squamous cell skin cancer.   Two older ladies were sitting on the porch watching her, Olga, her grandmother, and Maria, her aunt.  Katherine, one of the missionary teachers from El Camino school, was running and playing with her.

Deneli was staying overnight at the Center as she prepared for surgery to take place first thing in the morning. This is another service the Center provides, as there are times when patients and their families come from many miles away and need a place to stay. For some reason, Holiday Inn hasn’t chosen to put a nice little Express unit out here. She was scheduled to have the skin cancers removed from her face, and some work on her eye as well.

We approached her, and she was extremely outgoing. She ran right up to us and insisted that I join in her race. I have been around many people with medical conditions that render their appearance somewhat shocking, so I think I was able to match her enthusiasm without being awkward. I wish I could say the same for my sweet daughter, Juliet. She was quite visibly taken aback by Deneli’s appearance, and actually backed away. Deneli’s Aunt told me that it is very common that other children ‘are afraid of her.’ Heidi spoke some encouraging words in Juliet’s ears, but unfortunately this wasn’t enough to help her overcome her anxiety. I think this was a definite growth edge moment for her, and I hope we will be able to build on it in the future.

For those of us that might look upon Deneli and have thoughts of pity and sorrow for her, just stop right there. This little gal exudes an indomitable spirit. She has a fire in her heart. As my Dad says, she is ‘full of piss and vinegar.’ She grabbed Heidi and my hands, and wanted to race. She would tell us in her garbled Spanish to get ready, uno-dose-TRES!! And off we would go. Several times she scolded Heidi something fierce for having her foot slightly further ahead, as we were toeing the ‘start line.’ She wasn’t going to give up any advantage in this world renown competition. She ran us around the lot until we were good and tired, and then we had to rest. She did not.

She was very deliberate about touching us, grabbing our hands, actually touching my face quite a bit. I think it’s because she may not always have willing participants where she is from. Later, we talked to our kids about Deneli and her condition. We talked to them about how Jesus approached people like this. How did people of Biblical times approach Leper’s? Lepers were anyone who had a visible and serious skin condition, and by Law they were not to be touched, and in fact were isolated and outcast by the community. They were shunned and despised. In Matthew Chapter 8, a Leper approaches Jesus, drops to his knees and asks Jesus if He would heal him. Jesus, of course, heals him. But what is more significant is how he heals him. He could have just said ‘you are healed,’ and presto, it would have been done. But He not only heals him physically, He heals him emotionally as well, because he performs the healing by TOUCHING the leper, probably the first time he had been physically touched by another human being in years. Very cool.

We really enjoyed our time with Deneli and ask for prayers for her surgery and her ongoing condition. Unfortunately, she will succumb to this disease, and likely not reach adulthood. But instead of thinking how sad this is, remember that she is making the most of her years, she is really living life. Some people live for 80 years and haven’t enjoyed life as much as she.

For some reason, Loma de Luz has become the ‘go to’ facility in Honduras for this condition. There was another little boy who had this condition as well. In fact, before we came down here I followed the blog of Judy Blumhoefer, MD, our pediatrician on staff. She wrote about this young man, and I read about him one night with tears falling from my cheeks. Read this first, and then this, if you like. She has many amazing stories. Some with happy endings, and some not.

We said goodbye to an amazing family that visited Loma de Luz for 2 weeks, the Fredettes. Paul is a general surgeon, Rene a family doctor. They brought there friend Casey to help with their 4 children, Madeline, Gabriel, Elise and Blaze, while they served the people with their medical talents. They return to their home in Bellingham Washington, with plans to return in a year. Thanks Fredettes, you are awesome!

The boys keep missing the bus to school. They go to a Honduran school 2 days a week. Last week, they were out at the bus stop at 6:25 AM to catch the 6:30 bus. Unfortunately, the guard at the gate informed Heidi that they had missed the bus, it had gone by 5 minutes earlier. Crap. Oh well, we’ll just go on Friday instead. Friday morning Heidi takes them down there at 6:15 AM. The guard gives her a sheepish shoulder shrug, missed it again, came at 6:10 today… I thought people were supposed to be running behind all the time down here. And we can’t take them to school ourselves, our car isn’t able to cross the river. just weird.

My Auntie Lynn passed away last week. It is times like this that we feel some of the sacrifice of being a missionary far from home. We are sad that we cannot join our family in person, to share in grief, and to offer support. We will miss you, Auntie Lynn, such a thoughtful and caring person.

As always, some photos:

One of the wonderful institutions that Honduras has adopted from the American culture. Maybe I’m mistaken, maybe ‘Hooties’ is completely different than ‘Hooters.’ I think I saw some nuns going in there…

This is the Cougar Moultray family, hanging out with one of our inspirations, Bob Goff, who wrote the book, ‘Love Does.’
read his book.
Then, move to Honduras. 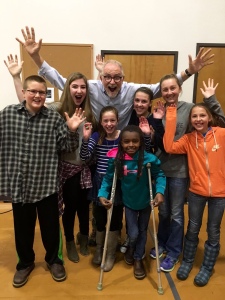 As you can see, Bob is a bit of a spaz.
We should all be spazzes a bit more…

The road washed out after a heavy rain. We were still able to get around.

Heidi and I went away for the weekend to celebrate our 17 year anniversary. One of the other missionary families offered to watch our children, so off we went to the national park of ‘Pico Bonito’ which is the very original name given to an area centered around a beautiful peak. It means: beautiful peak.

Heidi sitting on a big rock in front of the Rio Cangrejal, an epic river with class 5 rapids.

Heidi, basking in magical sunlight, just before her fairy godmother alighted on her shoulder and turned her into Taylor Swift, riding a unicorn.

This was literally the end of the road along the North Coast of our area. Cute little fishing village.

We parked here and went out toward the reef. The two young men who owned this fishing boat, were hanging out here, shooting the breeze.

This was the ‘road’ that Peter spotted from Google Earth, that he was hopeful would take us right down to the beach. didn’t quite work out.

This is us, out in a field, trying really hard to get Peter’s rig stuck in muddy cow poo. 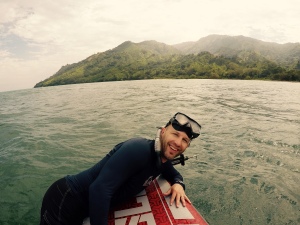 Ryan, catching a breather on the paddle board while hunting for fish.

Heidi, with Peter Stockton in the background. 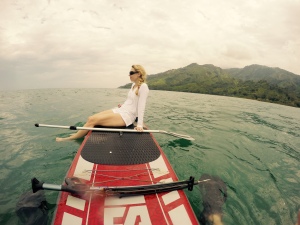 Heidi, hanging out on a paddle board..

This was my buddy at the Rio Coco beach, Eriol. He was trying to put me in the right place to find some fish, but it didn’t pan out.